skip to main | skip to sidebar

A Letter from Lady Katherine Stanfield, the heroine of BETRAYAL

My name is Katherine Stanfield. Five years ago, I was betrothed to Lord Nicholas de Lauren, the only man I will ever love. And five years ago, I deserted him for another man.

Fate and a deadly enemy have brought us together again now. Finally, my dream of marriage to Nicholas has come true and I am Lady de Lauren. But I cannot delude myself that this marriage is the second chance at love that I'd prayed for. Not at all. Nicholas is openly bitter. He has not forgiven me for that betrayal of five years ago.

In a recent conversation, we quarrelled about the past:

Following a tense meal in Merton hall, Katherine walked beside de Lauren up the wide castle steps. She went by the lady's chamber, onto the lord's with him. Inside the room, she turned on him.

"You knew. You rendered aid following William's attack. You knew what he had done, yet, you brought me here where my presence could only hurt these good people. Had you no other allies in the vicinity where we could have lodged this night, we were well prepared to sleep on the road."

De Lauren's voice was cold. "'It was time Stanfield's lady saw for herself what her noble house has become under William Norris' rule."

Dishonorable. Unscrupulous. Treacherous. Tears burned her eyes. Aye, she knew well that with her marriage to William, she'd destroyed all her father and what Stanfield lords before him had spent their lives building.

"Think you, you have revealed something about William that was unknown to me?" Katherine wiped her wet cheeks with the back of her hand, and straightened her shoulders. "Be assured, I knew what manner of man William was when I married him. And if I had it to do again, I would do the same."

I spoke the truth when I said those words to Nicholas. I would not change that past, even if I could. In truth, even if he did forgive my betrayal of five years ago, that would not be the end of it and enable us to start fresh.

For what Nicholas does not know, is that in the last few hours since I became his wife, I betrayed him again . . .

i just wanted to say that i read the book and it is by far the best book i have ever read! it had suspense, romance, and action.

Anon, thank you so much for those kind words. I'm thrilled that you enjoyed the book.

Truly loved "Betrayal" and would love to see a follow-up story to it, perhaps Stephen's story and an update on Lady Katherine and de Lauren. There are so few great Medieval books out there, and most have over-the-top sex scenes in it rather than a great story and relatable characters. Very Well done!

Pat4Him, thank you so much for letting me know you enjoyed BETRAYAL. I appreciate your interest and your kind words very much.

I don't have plans for a follow-up story at this time, though, I would like to write more about these characters at some point down the road. I'm so glad you found the characters to be relatable. I enjoyed writing in the Medieval period and writing about Katherine, de Lauren and all the others very much.

Thank you for getting in touch. It was so nice to hear from you.

With all best wishes,

Medieval is my favorite period. I loved "Betrayal" and would love to see a follow-up story to it. I do wish it ended later.It is one of the best books I've ever read. I can't wait for you to write another historical. Thank you for writing it.

valestt, thank you so much for your kind words about "Betrayal" I'm so glad you enjoyed the book. I appreciate you letting me know. I also enjoy books set in the Medieval period. I haven't found too many of them lately. Here's hoping more will become available soon! Thank you so much for writing. It was so nice to hear from you.

Karen Fenech
USA TODAY BESTSELLING AUTHOR KAREN FENECH writes romantic suspense novels and short works of suspense. She is the author of the romantic suspense series, The Protectors. Karen's novels and short suspense fiction have received critical acclaim. Her novels have been translated into several languages and have been released in audio by her publisher. When Karen's not writing or spending time with her family, she loves to shop, watch movies, and just kick back in a comfortable chair and read. You can reach Karen here: Facebook: http://www.facebook.com/KarenFenechsFriends?ref=hl Twitter: https://twitter.com/karenfenech Website: http://www.karenfenech.com If you'd like to know when Karen Fenech's next novel is released, sign up for her notification-only news at: www.karenfenech.com/books.html 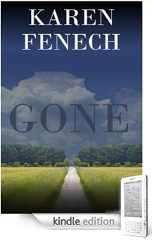 "Karen Fenech's GONE is a real page turner front to back. You won't be able to put this one down!" --- New York Times Bestselling Author Kat Martin

"Karen Fenech tells a taut tale with great characters and lots of twists. This is a writer you need to read." --- USA Today Bestselling Author Maureen Child

"Readers will find themselves in the grip of GONE as this riveting tale plays out. GONE is a provocative thriller filled with a roller coaster ride that carries the suspense until the last page." --- Deborah C. Jackson, Romance Reviews Today

FBI Special Agent Clare Marshall was separated from her sister Beth in childhood when their mother tried to kill them. Now Clare learns that Beth lives in the small town of Farley, South Carolina but when she goes there to reunite with Beth, Clare discovers her sister is missing and that someone in the town is responsible for her disappearance.

Clare receives an offer to help with the search from fellow FBI Special Agent Jake Sutton. The offer is too good to refuse, though that is exactly what Clare wants to do. Jake is Clare’s former lover, a man she cannot forget and who has an agenda of his own.

Now while Clare tracks her sister, someone is tracking Clare, and finding her sister may cost Clare her life. 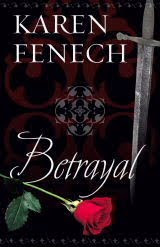 "I love a good medieval and Karen Fenech has written a dandy! This one's a keeper."
---NEW YORK TIMES BESTSELLING AUTHOR KAT MARTIN

To save her son and people from a deadly enemy, Lady Katherine Stanfield marries her former betrothed, a man she'd betrayed but has never stopped loving. Katherine has never revealed her reason for the betrayal, and now five years later, believes her secret is safe.

Someone won't let the past rest. Someone with a secret of his own. Now she must stop that "someone" because he wants Katherine and her new husband dead.

". . . will keep you reading into the wee hours of the morning. Highly recommended!"

Liz Janssen's marriage was over long before she filed for divorce. There was no way her soon-to-be ex-husband committed suicide because of her. Yet that is what her teenage son, Will, believes.

Others in the small West Virginia town share this thinking. Others who are disciples of a homicidal Satanic cult her husband was part of. The disciples want vengeance for the death of one of their own and will use Liz's troubled, grief-stricken son as an instrument for their revenge. To save herself and Will, Liz must stop them - and she must do so without Doug finding out.

Doug McBride is the new town sheriff, the man Liz has fallen in love with, and the man she cannot trust.

PRAISE FOR IMPOSTER: THE PROTECTORS SERIES - BOOK ONE

ABOUT THE PROTECTORS SERIES:

THE PROTECTORS: Though they work independently and at times are oceans apart, their ties to each other remain strong. They’re related by blood or bond – this group of men and women in law enforcement, government intelligence, and the military who do what others cannot to serve, defend, and protect.

ABOUT IMPOSTER: THE PROTECTORS SERIES - BOOK ONE:

IMPOSTER: The Protectors Series - Book One: Chemist Dr. Eve Collins, wrongly accused by the CIA of developing and marketing a chemical weapon, learns she has been set up as a scapegoat by someone seeking to hide his own guilt. That “someone” wants her dead. Her life depends on making no mistakes – like trusting the Central Intelligence agent assigned to her case, a man she’s falling in love with.

CIA Operative John Burke doesn't believe her claim of innocence. When an attempt is made on her life, he believes her accomplice has turned on her. But something doesn't add up about Eve and her role in this crime she's accused of. Burke has too many questions, including - has his judgment been compromised by his fierce attraction to her?

It’s a question Burke asks himself again and again but when he learns Eve’s would-be assassin is close, he goes on the run with her. It's a temporary solution - running will not keep her safe. Burke must find the assassin - or die trying.

When her cover is blown in a criminal operation to apprehend a human trafficker, FBI Special Agent Mallory Burke is put in a car destined for a mountain cabin to be tortured and killed. But a snow storm results in an accident that leaves all but Mallory dead and she finds herself in the midst of the raging storm and in the care of Police Captain Gage Broderick. Mallory's relief that Gage is a cop is short lived. He has secrets of his own.

Gage is haunted by an incident in his recent past. The last thing he wants is to become embroiled in Mallory's investigation - or to feel this powerful attraction to her.

But the lives of twelve women depend on Mallory
and Gage working together to stop this man - the women's lives and now Mallory's life. He knows about her. He knows where she is. And he wants her dead.

THREE SHORT STORIES OF SUSPENSE: DEADLY THOUGHTS, SECRETS & THE PLAN by critically acclaimed author Karen Fenech were all previously published domestically, and published internationally in HJEMETT Magazines in translation to Swedish, Danish, and Norwegian. These stories have now been compiled for the first time and reissued for Kindle.

THE PLAN: To get her dream life, Jackie comes up with a plan. But is the plan the key to her dream, or to her worst nightmare?

DEADLY THOUGHTS: What price is too high to achieve a dream? Would you draw the line at murder? Abby Branson never expected to be faced with such a question. But in her single-minded pursuit of her dream, she's sacrificed everything, including her marriage. Now, she just wants back what she had - even if it means giving up her dream forever. But it may be too late to go back. Because one man is already dead.

SECRETS: Everyone has secrets. Some are good. Some are bad. For Emily Brandewynne, out for a weekend fling from her marriage, her secret is deadly.